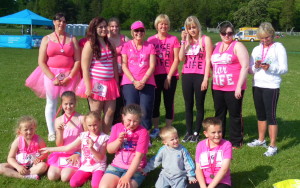 A FAMILY from Melksham has taken on a poignant Race for Life, raising money for Cancer Research UK, just months after losing a member of their family to the disease.

Nicola Robertson who grew up in Melksham and was extremely popular and well-known in the town, sadly lost her life to cancer in March, aged just 28.

She was diagnosed with the disease in 2012 and she had originally hoped to take part in the Race for Life which took place on June 2nd in Swindon. Unfortunately, as her condition deteriorated it became clear she would not be able to complete the race and sadly passed away in March.

This made her friends and family even more determined to complete the race and raise money for Cancer Research UK.

The team all completed the race and were called ‘Race for Nic’ in memory of Nicola.

Included in the team were Nicola’s children Brooke aged eight and Kristen aged 11. Her other son, Caleb aged four, also cheered the team on.

Nicola’s mum, Bev Viveash, who also completed the race said, “It was a very emotional day.  We were all excited to be taking part especially the children.  The atmosphere was great – but it was also a time when Nic should have been with us so we had a tear as well.

“Everyone was there for the same reason to tell ‘Cancer – ‘we’re coming to get you’.  To see 1,500 people all dressed in pink with personal messages on their t-shirts either celebrating beating cancer or in memory of someone they had lost to this dreadful disease was very emotional.

“I  think we all did Nic proud – she would have loved the day especially the cake and champagne we had afterwards to celebrate what we had done and to raise a toast to her.

“We had fantastic support from family, friends and work colleagues.  Nic’s friends and their children also took part in the race with us.

“We put our target at £500 to be raised and thought that would be great.  But with everyone’s kindness and support we are now at almost £2,500.  So a big thank you to everyone who sponsored us.”

Nicola’s son, Kristen, was first to finish from the ‘Race for Nic’ team and was at the finish line along with Nic’s dad, John Viveash, brother, Andy Viveash and youngest son Caleb to cheer the rest of the team when they finished.

The family will continue its fundraising efforts by having a stall at Melksham Party in the Park. The stall will have a tombola, guess the number of sweets in the jar and guess the teddy’s birthday.

This will be for the Royal United Hospital Forever Friends Cancer Appeal.  The money will go towards re-building the cancer unit where Nicola was treated and where she was so well looked after by all the doctors and staff.

The sponsor page for the ‘Race for Nic’ and its bid to raise funds for Cancer Research UK is still open. To donate visit http://www.raceforlifesponsorme.org/race-for-nic.