IT’S time to get into the party spirit as the stage is set for Melksham’s Carnival and Party in the Park on Saturday 13th July. 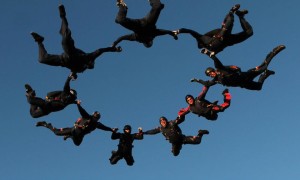 This year both events will return to being on the same day, giving the people of Melksham an opportunity to enjoy double the fun.

The Party in the Park begins at 1.00pm with attractions including two displays by the REME Parachute Team; UK ska band 2Rude playing cover songs by Madness, The Specials, Bad Manners and The Beat; music by The Ray Jones Band, El Nino and Black Widow; young performers like Jordan Whatley, Maisi Marchant and Courtney Buchanan (fresh from her recent O2 Arena appearance!); an acrobatic display by The FH Extreme Free Runners; as well as a wide range of attractions for children including a surprise visit by Peppa Pig!

As always, there will be the Grand Fireworks Display to round the event off.

The Party will break at 5.00pm for Melksham Carnival as a whole array of colourful floats, bands and walking groups take to the streets to entertain the crowds.

The organisers are urging the community to get involved and help make it a memorable day.

Vice-chair of Melksham Carnival committee, Simon Hedley said, “We put the Carnival on each year for people to come along and enjoy. It’s an event that involves the whole community, from businesses putting on floats, to revellers on the streets – it’s a day for Melksham and shows the real community spirit here.

“This year will be better then ever! We have a new committee and we hope to build on all the excellent work done in previous years, but with a fresh approach and new ideas. Everyone has happy memories from the carnival going way back – to the 1970s for me! So it means a lot to us all.”

Chairman of Party in the Park, Tom Sangster said, “We are celebrating the 14th year of the event.  During those years, Party in the Park has grown in profile and become well known in the county as being an event that provides great quality entertainment and enjoyment for family members of all ages.

“Melksham can be proud to have such an event which has lasted the course.

“We look forward to some highly entertaining acts and performances.  We are crossing our fingers that we will, this year, see freefall parachuting at Party in the Park, after last year’s disappointment due to high winds.

“We are pleased to be back on Carnival day, so hope everyone enjoys that too!”

“There will be the procession and dancing groups and much more. We are also very excited to have reggae and calypso singer Antigua Joe this year. So, just come along and get involved.

“There’s still time to enter a float; groups of walkers in fancy dress are especially welcome. We’re hoping as many groups and individuals as possible will join in and, of course, that the whole town turns out to support us.”

They will all bring the Carnival spirit to the town as they make their way across Melksham, leaving Cooper Tires car park at 5.00pm.

Beth says, “Party in the Park and Melksham Carnival are great events. Having them on the same day will bring more people to both events. We wish them every success with their event.”

Judges for this year’s Carnival will be standing amongst the crowd as they pick out the best walking group, best float, best school entrant and a Mayor’s choice. There will be 12 judges in total and a prize winner be presented to the winners of each category.

Entry is still open for floats and marching bands. You can pick up an application pack by calling Beth on 791193.

Party in the Park takes place all day with gates opening at 1.00pm and the event finishing at 11.00pm. There will be a break at 5.00pm for the Carnival procession.