Melksham hairdressers are a cut above the rest!

TOPS hair salon is celebrating more success after two of its stylists finished in the top ten in the country in the Goldwell Global Color Zoom Challenge. 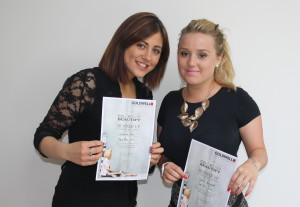 Natasha Hall and Sophie Freegard finished 6th and 8th out of 3,000 entries from the UK in the Global New Talent Colorist category. This is open to all Goldwell junior stylists who have less than five years’ professional experience, using Topchic, Colorance, Elumen and Nectaya for their color creations.

The top five stylists from each of the 40 competing nations come together for a final in Los Angles in October.

Natasha, aged 19, actually finished in fifth place to only be demoted to sixth due to her age. This year the minimum age for finalists is 21 due to the event being staged in the USA.

She said, “I was devastated at first when I found out I had missed out on LA because of my age, but I am really pleased with what I have achieved.

“I wasn’t expecting to do so well as it’s such a hard competition. I have entered three times now and finished in the top 100 previously.

“Everyone has been really chuffed for us. Customers come in and are always asking how we are doing and what competitions we are in. It’s really good for the salon.

“I am really happy for Sophie too who has done so well considering she only started this year!”

Sophie’s 8th place in her first Goldwell Color Zoom challenge was a remarkable achievement considering she only started this year. She said, “I was really shocked. I wasn’t expecting too much as it was my first time. It feels good to have done so well, especially as I have only been here since January.”

Manager of the salon, Victoria Stevens was very happy for her two stylists, saying, “It’s fantastic. For them both to do so well is great for them, for the salon and for Melksham.

“I am gutted for Natasha that she is missing out on Los Angles but I know she will fight back. She’s worked hard on the past year and it’s great that this effort has been recognised by such a high placing.

“Sophie has done so well. Considering she has only been with us since january it’s good for her that she has been recognised and achieved so much early on.”

Tops salon had the two highest placings from a single salon across the whole country.

88 Responses to Melksham hairdressers are a cut above the rest!