AN amateur golf enthusiast has played non-stop for 24 hours at Whitley Golf Club to raise money for three charities. 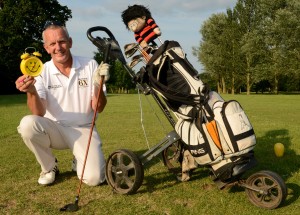 Kevan Mullan started at 7pm one evening and played non-stop for 24 hours. In that time he completed 144 holes or eight complete rounds.

The challenge was in aid of Dorothy House, Air Ambulance and Mencap.

Friends and family took it in turns to walk the course supporting Kevan during the 24 hours. He has raised over £1,000 for the charities in total.

He said, “We just decided to do something to raise money so one evening in the club I come up with the idea of playing non-stop as I can’t recall anyone doing it before.

“At night time we used an aluminated ball so we could see it but that didn’t help when in heavy rough or in the water.  It was a lot harder then I thought it would be and the standard of my game dropped by the last round but it’s all about raising money for three wonderful charities. The charities mean a lot to me as I have lost a few people close to me to cancer so that spurs you on.”