AT the end of a hot summer season Melksham Netball Team took part in a fancy dress charity netball match at Warminster on 31st July to raise funds for Breast Cancer Care. They say, “Two members of our team have recently recovered from breast cancer so it was great to be able to raise funds in this way. 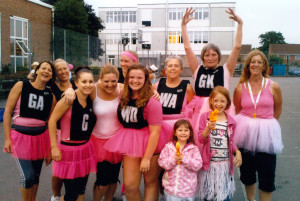 “We played three matches in two hours with a plastic pig, a rubber cake and many odd sized balls instead of the usual netball. The umpires had water pistols and the whole evening was great fun, so much so that no-one could remember the scores!

“Anyhow, special thanks to anyone who lent us a tutu and a big thank you to everyone who sponsored us, it was much appreciated.”

The event raised over £600 for the Breast Cancer Care charity.