MELKSHAM Oak Community School is celebrating after securing their best ever GCSE results a week after achieving a 100% pass rate at A-level. 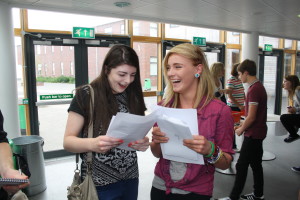 Among the top performing students were Joanna Bayley and Zoe Cole. Joanna’s results included seven A* grades while Zoe got five A* grades and six As. Zoe said, “I feel amazing and all the hard work I put in has really paid off. It was all definitely  worth it!”

Another top performer was Gabby Wellon, who got an A* in both maths and English. She said, “It’s great. I’ve done better than I thought I would. I got an A* in maths and I was expecting a B and the same for English which I’ve never been good at.”

Budding journalist Sarah Rendell was also pleased with her results. She said, “It’s unbelievable! To get As when I was predicted Bs is just well, unbelievable – especially to get two As in English which is really good as I want to be a journalist. I’m so pleased the hard work has paid off.”

Headteacher Stephen Clarke praised the hard work of his students and staff. He said, “These results are above the government targets and they are a reflection of the hard work and commitment of students, parents, teachers and governors.

“This is the fourth year running we are in the top 20 per cent of schools in the country for value-added and is a reflection of our ongoing transformation into a centre of excellence for learning and being a great school for our community.”

The excellent GCSE results followed a successful set of A-level results for the school as 100% of the students passed.

Headteacher Stephen Clark added, “We had 100 per cent pass rate at A2, which accounts to having done better than last year. This is a great achievement and a reflection of the students’ hard work, as well as parental and teacher support.

“Every year it’s wonderful to see the students so happy with what they have achieved. We had some impressive high-achievers, including Georgia Newman, Polly Thompson, Lucy Dobson, Emily Slatford, Nicholas Clark, Sophie Lavery and Alex Thomson.”

Emily Slatford one of the highest achievers said, “I got three Bs, and I’m hoping to go to Bath Spa to do history. This morning was the worst part, but it’s all good now.”