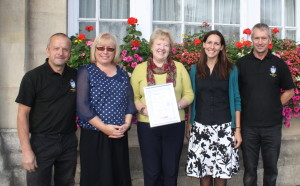 THE hard work of the community has paid off as Melksham has been awarded a silver in the South-West in Bloom competition.

The town was presented with the award at the annual presentation ceremony held this year in Truro. Miriam Zaccarelli, Lorraine McRandle and Terri Welch from the town council represented Melksham and received the award. The silver award came in The Nellie Sargent Cup where Melksham competed against similar sized towns. The winner of this category was Thornbury in South Gloucestershire.

The result comes after judges visited Melksham in July and were given a tour of the town taking in parts of the town such as Church Walk, The Market Place, The Bear, Conigre Mead Nature Reserve, Aloeric School and more.

Despite being a late entry in this year’s competition having only entered four weeks previously, judges were extremely impressed. Judges Rod Pooley and Alison Wade said, “Overall, as a first-time entry and considering what little time there was to prepare, the feeling we had was of an excellent attempt where we were shown some wonderful examples of community effort.

“There is obviously huge pride in Melksham from the town council, residents and businesses and real potential to build on this in the future.

“The vision to make Melksham a ‘Flower Town’ featuring floral decorations and themes will promote the town and create an environment and reputation that promotes Melksham as a great place to live, work and visit.”

Miriam Zaccarelli who collected the award said, “It’s a great achievement for the town to get silver and a big thank you must go to everyone that made this possible. This is a community effort and a community award that we can all be proud of.

“As we only had four weeks to prepare for this year it made it difficult, but everyone can be proud of their efforts.

“The planning has already started for next year’s competition and we are determined to get that gold. We have taken on board the feedback from the judges, as well as the positive comments and aim to build on that for next year and improve.”