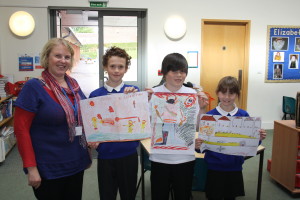 The pupils work will be displayed at the Bath Comic & Sci-Fi Weekender.

Pupils Lauren Lawes, David Ambrose and Harvey Conrath, all ten years of age, won a competition and will now have their work displayed next to that of some of the leading names in comics and sci-fi.

The organisers of Bath Comic and Sci-Fi Weekender organised the competition where pupils from Bowerhill had to produce artwork depicting comics or sci-fi. They were given the freedom to design the artwork how they wanted. Art co-ordinator at Bowerhill Primary School, Kat Tregale said, “I let them design it how they wanted, leaving it up to them as to whether to do a comic-strip, drawing or just about anything they wanted.

“I’m very impressed with the standard, they have all shown great imagination and I think it’s interesting that all three of the winners chose a different style to design their artwork.

Winner Lauren Lawes said, “I based my design on my favourite film ‘Snow Buddies’ and did it in a comic-book style. I was really happy when I found out I had won, I didn’t expect it. I’m looking forward to seeing my work shown for everyone to see.”

Second place, Darren Ambrose was also pleased. He said, “I had assumed I had lost so was very surprised to be named as one of the three winners. It slightly terrifies me knowing so many people are going to see my work.” Third place, Harvey Conrath said, “It was definitely unexpected. I am happy to have got third and it’s nice that our work is going to get shown.”

The Bath Comic and Sci-Fi Weekender takes place this weekend on 28th and 29th September in the Masonic Hall on Old Orchard Street. Tickets cost £6 for a weekend ticket or £5 for a day ticket. Under 5s are free entry.