Melksham historian claims more could be made of White Horse 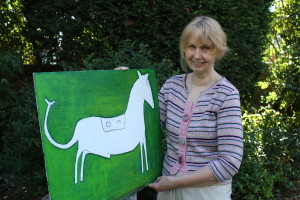 Stephanie Stephenson with a depiction of the original horse

A HISTORIAN from Melksham has claimed Westbury should make more of its White Horse – but not the White Horse you see today.

In 1778, the former White Horse was altered to the figure the town knows today.  Melksham historian Stephanie Stephenson wants to start a discussion on whether the horse would be better returned to its pre-1778 form. This horse is a smaller, leaner saddled figure, facing the opposite way. Stephanie says it is the former horse that has the real historical value, and wants to hear people’s thoughts on the subject. The present day concrete version, she says, “takes away from the heritage. It’s a bit like covering up Stonehenge with concrete.”

She believes that having the former version on display would boost its asset as a draw for tourism and civic pride.

“In a 14th century official document, it is written ‘the White Horse is one of the marvels of Britain, second only to Stonehenge. In 1778, the steward to Lord Abingdon, Mr Gee, surveyed his employer’s estate in Westbury Parish. When he settled his attention on the Bratton Horse, he decided to remodel it to a larger design, more in taste to his age. The ancient hill figure, so long a feature of the vale below, was altered to a Stubbs-type pleasing shape and reversed to ‘sinister’, the word for left, where the original resided ‘dexter’ – right. Mr Gee was immediately condemned. He was abused as a vandal, a barbarian, a miserable creature, a wretch, an unimaginable busybody, for destroying a much fond of landmark of considerable age. It is a great pity the original and oldest of the Wiltshire symbols lies under fashionable alterations.”

Legend says a horse was originally carved onto the site to commemorate King Alfred’s victory over the Danes in the Battle of Ethandun in AD 878. It was one of the most momentous battles in history, leading to the creation of the English nation and ensuring that Christianity would survive in Britain. A horse was recorded in a sketch of 1772, and this is the design Stephanie wants to consider. The current horse is the 1778 design.