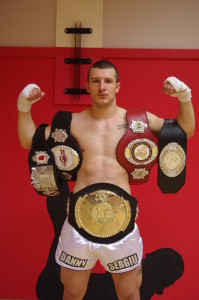 AFTER the success they had last year in Bournemouth, the ‘World Muay Thai Series’ Asian promotion has decided to come back to the UK, this time in Exeter, scheduled for 5th October.

Melksham-based instructor Danny Sergiu of Collision Fight Academy from Bath and Westbury is the only club in Somerset and Wiltshire to be invited to participate in this big event. The academy will be represented by young knockout artists Kieran Hardy and Corey Paterson both fighting on the undercard, and Danny is scheduled to be the co-main event.

Sergiu said, “Firstly I would like to thank the promoters for giving us the opportunity to fight on this event, because this is a massive step up for me and my students, and I think it’s a big deal to be the only gym in this area to be offered the chance to participate. As always we will do our best and hopefully maintain our winning streaks.

“Here’s the reason why I am so excited about my fight especially. Not only that the Asian promoters are putting the CHANG cup on the line in this fight, but the winner will have the opportunity to qualify for the S1 championship in Bangkok, which is something like the UEFA champions league of Muay Thai!

“The previous event was televised on the Active Channel on Sky and is on repeat again this month I believe. hopefully they will manage to televise the October event as well.

“My opponent is local from Exeter, his name is Jake Purdy; he has got eight wins and only two losses. I don’t know much about him but do know he’s got very powerful kicks and trains about six-seven times a week, and at the moment he’s training in a camp in Thailand.

“I know for a fact that it will be a tough fight, but that’s what I want. I don’t want to hide behind weak opponents and have easy wins. The Chinese tattoo on my left leg actually translates as: ‘I am never afraid of failure, for I would rather fail than not be among the best’.

“The training for these fights is pretty much similar to what we’ve done for our previous fights. We try working on all aspects of our game which is: Muay Thai technique, strength and conditioning sessions in the gym and outdoors as well, and sparring. We have been matched for some real boxing fights in Bath on the 30th August which is also part of our preparation.