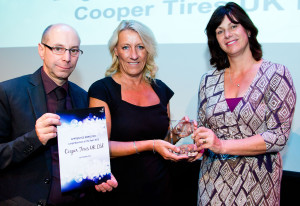 Cooper Tires recruit numerous apprentices each year in engineering as well as business administration, and were commended for setting their achievement criteria over and above the national framework requirements. In addition, one of the apprentices, Harry Beer, was awarded ‘Advanced Apprentice of the Year’ in mechanical engineering at the ceremony, following great success in his apprenticeship. Harry, who was also recently invited to meet the Deputy Prime Minister, Nick Clegg, at an apprenticeship event in Westminster, commented,

“It is brilliant to win this award. I hope to take things further and become a steel engineer after completing my apprenticeship. My advice to others who are wondering what to do after school is to find something you want to be involved in and just go for it. Doing an apprenticeship is the best decision I have ever made.”