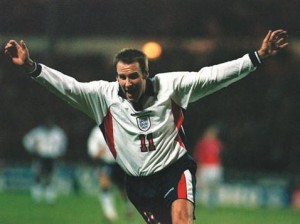 Paul Merson will be joined by comedian Russ Williams for the evening which takes place at Melksham Assembly Hall on Wednesday 23rd October.

The evening follows on from a successful event held in April when another former England international, Matt Le Tissier, visited for the sportsman dinner event.  Paul Merson had a glittering playing career, including representing England 21 times, scoring three goals in the process. His club career was mostly spent at Arsenal where he played 289 times over 12 years. He also played for  Middlesbrough, Aston Villa and Portsmouth.

His playing career was however, tempered by a drug and alcohol addiction, which forced the Football Association to put him on a three-month rehabilitation programme in 1994.  Since his playing career ended he has become a well-known football pundit on Sky Sports and is a regular feature on the popular Soccer Saturday show.

He will be joined on the evening by comedian, Russ Williams who has an excellent reputation having worked with names such as Freddie Starr and Englebert Humperdinck.

Darren Perrin from Melksham Town FC said, “It is fantastic for the club, the town and the community that we are able to get the likes of Paul Merson and Matt Le Tissier before to come here. The fact it has sold out is further testament to the support we have and it’s a night to look forward to.

“It’s a great opportunity for the community of Melksham to hear stories about Paul Gascoigne and Tony Adams, as well as hear about some of Paul’s antics. It will also be fantastic for the people of Melksham to see a fantastic comedian in Russ Williams and just to enjoy a great evening with friends or family.”

Pictured: Paul Merson after scoring for England at Wembley