Wiltshire Mind opens its doors once again in Melksham 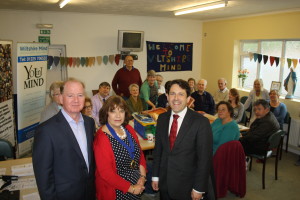 WILTSHIRE Mind has officially re-opened its doors to its drop-in centre a year after it was forced to close.

The mental health charity based in Melksham was forced to close its drop-in service after it lost a council contract which left them on the brink of bankruptcy. However, fundraising efforts throughout the community has allowed the valuable session to become available again. It will run every Wednesday between 1.00pm-4.00pm at The Parish Of St Anthony of Padua and provides a friendly, safe place where people can find support, friendship and have someone to listen to them.

The group re-opened its doors in June but waited until now to make it official as they wanted see what numbers used the group. Chief executive officer for Wiltshire Mind, David McKeigue said, “This is a key success for both Wiltshire Mind and myself in the turnaround of the charity. It is so fantastic to have not only local Melksham demand for our services but also local financial support as well.

“This is the first step of many in terms of Wiltshire Mind extending its current services (group social support and counselling) across Wiltshire. Wiltshire Mind are based in Melksham and so it is really great to be providing our valuable services to the very community we are also based in. Since we opened our doors again a few months ago we have had around 1-12 attend each session so it is a well used service and extremely valuable for those that attend. Now it is about getting the message out there that we are open and available to the community and it is about looking forward and to the positives and for a brighter future. I would like to express my gratitude to all those that have contributed to this great news and to the church who kindly let us use their space to host the group.”

MP Duncan Hames shared the positive attitude. He said, “It really is fantastic that this group has re-opened as it is a valuable service to Melksham and the community. It is important we don’t end up in a position again where the group has to close as it’s worth is invaluable.”