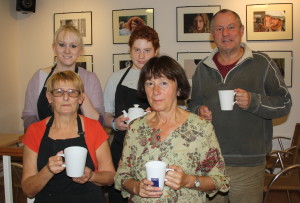 The Art House Cafe gets involved!

COFFEE mornings across Melksham have raised hundreds of pounds for a national charity.

The biggest fundraising total came from Rowley Place where they managed to raise over £800  thanks to a cake sale, coffee and raffle. Nick Gaplin said, “We are all absolutely delighted with the amount we have raised. We do a fantastic job here of raising funds as has been proved recently by another big cheque we have given to Wiltshire Air Ambulance recently. We had a very generous person come in and hand over £100 towards the coffee morning so we are blessed.”

Included in the £800 raised for Macmillan was £154 raised by the cake stall manned by Vera Angel, Joan Wood and Tanya Ward.

A cake sale was held at Boots in the town centre which raised £136.38.

Residents of Wharf Court held a bring and buy coffee morning on 27th September for Macmillan nurses and raised £253.50. PJ West a resident at Wharf Court said, “Thank you all, for being so generous and for those who worked hard. Thank you also to the hosts, Pam and friends.”

Seend’s bit of ‘The World’s Biggest Coffee Morning’ for Macmillan on Friday 27th made nearly £420 (£450 including gift aid).

Melksham Baptist Church on Old Broughton Road held a coffee morning that included a bring and buy cake sale and more then doubled their fundraising from last year with a total of £130 raised. Kay Perry from the church said, “It was fantastic. We have done really well compared to last year and we are pleased. We would like to thank everyone who helped make it a success and helped us raise so much.”