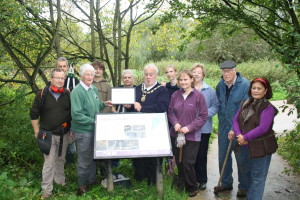 THE South West in Bloom’s ‘It’s your Neighbourhood Award’ has been presented to Conigre Nature Reserve by Melksham Town Council.

At a presentation held at the nature reserve itself, the Mayor  of Melksham, cllr Chris Petty, handed over the award to Gill Cardy who is a volunteer at the Conigre Nature Reserve.

The award was a result of Melksham’s South West in Bloom entry in July where judges visited the town before eventually deciding to award Melksham an overall award of silver at a ceremony in Truro. At that ceremony, Conigre Nature Reserve was singled out for being a thriving volunteer enterprise and it was announced that the nature reserve had won the ‘It’s your Neighbourhood Award.’

The mayor, cllr Chris Petty said, “It is fantastic to be able to hand over this award as it is very much deserved and a great community facility which is well used and a credit to Melksham.”

Gill Cardy who received the award on behalf of the nature reserve said, “It is very pleasing to be able to receive the award as a lot of hard wok goes into maintaining and improving the area.

“We have thousands of different wildlife and plants living in the nature reserve and some rare species have been spotted here, so it really is valuable.”