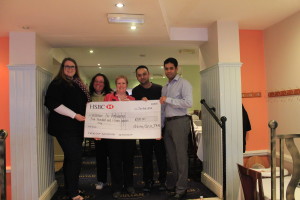 Last month 19-year-old Luke Dark was involved in a road traffic collision on Sandridge Hill before being air lifted by the air ambulance to Frenchay Hospital in Bristol. As a way of recognising the important role played by the air ambulance, friends of Luke’s family organised an event at Sultan to raise money.

The charity night was well attended with over 30 people buying tickets to the event to support Luke and the air ambulance. A raffle was held with prizes donated by local businesses including Andy York Photography, Candy Jacs, CJ’s, Gaming Galore,  Mark Giles photography and Collins. In total £250 was raised from the raffle and the Sultan restaurant raised this figure to £515.

One of the organisers Sue Horton said, “It was a fantastic evening and we are really happy with the amount raised. We are very grateful by Sultan’s incredible generosity in raising the total. We would also like to thank all the local businesses who donated prizes for the raffle and those that attended and supported the event.

“The Wiltshire Air Ambulance do so much good work and we know they are vital to those that need treatment. Without this service Luke probably wouldn’t be here, so that shows how vital it is”

Jemma Brown from Wiltshire Air Ambulance said, “We would like to thank everyone and Sultan for raising this incredible amount of money. We rely solely on donations and the support we receive like this is invaluable.”