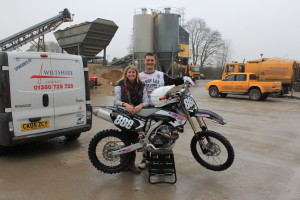 Leon Ireland and his motorcross bike.

A MELKSHAM motorcross racer is hoping to kick start his career as he returns to action following injury.

Leon Ireland will be on the starting line this weekend as the Portsmouth Mortorcross Cross Summer Series is set to start at  at Foxholes, near Salisbury. It will be his comeback season after suffering a dislocated shoulder 18 months ago after coming off his bike at a race at Grittenham, near Wootton Bassett.

The racer who has primarily competed for Bath and Upavon AMCA (Amateur Motor Cycle Association) clubs in recent years, is set for his first full season in the 18-race series and is aiming to test himself against some fierce competition.

He said, “I first started competing as a schoolboy from 6-15 years old and have been back riding on and off for about four years. I’m really looking forward to this year’s championship as I haven’t been involved in one for so long. With the previous championships you just collate points until you’re moved up, so I haven’t previously had anything to aim for. With this season starting now, I will be fighting for points to determine a place in the championship.

“I have prepared for the championship by doing a lot of cardio and weights as I have tried to strengthen the area where i was injured before. My shoulder still aches a lot and I lost a lot of muscle and strength, so I have to be cautious not to push myself too much. When the incident happened I didn’t think it was too serious but soon realised it was when I saw my left arm wasn’t in front of me! I had broken my shoulder and snapped the nerve to my fingers so I now have no feeling in two fingers.

“I have to thank Wiltshire Concrete who I work for as they have sponsored me and allowed me to have this opportunity. There is only a handful of racers as lucky as me so i hope to turn that support they have shown me into success; Kevin and Tracey McQuaid from the company have been fantastic!”