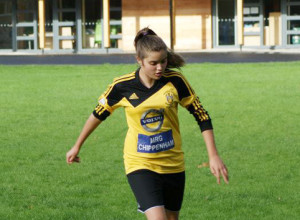 A MELKSHAM Town youth player has followed in her great-great-grandfather’s footsteps by representing the club 112 years after he did.

Sarah Pearce plays for the Melksham Town under 13s girls team whilst her great-great-grandfather, Herbert Hunt, played for the club in 1902 and was also part of the 1903/1904 Wiltshire League-winning squad – the only Melksham side to win the title in 80 years of competing in that league.

The discovery of the family link to the football club was uncovered after a recent death of a relative whose home was being cleared out. A team picture of the Melksham Town side in the season 1902/1903 was discovered showing Herbert Hunt as part of the successful team. He also later went on to serve in Persia during World War One. 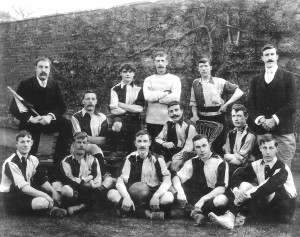 Sarah has been playing at the club for three years and has also been involved with the Wiltshire player development squad since September 2013.

Rob Bridges from Melksham Town FC said, “From chats with Sarah’s mum, it seems that football has not been a big participation sport in the family until Sarah began playing and the uncanny thing across the generations is that Sarah’s preferred position is on the right-hand side of midfield – where Herbert Hunt played all those years ago.”

Sarah’s family has now had two copies of the photograph taken off, one to keep as a momento for themselves and one for Melksham Town FC which will be put on display at the club.