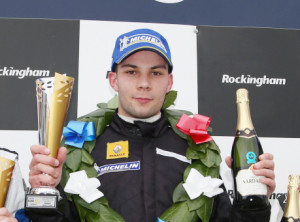 MELKSHAM racing driver Jake Honour made a sensational start to the 2014 Michelin Clio Cup Road Series season at Rockingham over the weekend of 5th/6th April, by converting a double pole position into two excellent race wins.

After leading the way in qualifying on Saturday, the privateer entrant – who races with engineering assistance from Jade Developments – never looked under threat in round one on Sunday morning and built a cushion of 2.5 seconds. Although rival Anton Spires (Milton Keynes) closed in towards the finish, Jake opened his 2014 account in style with a terrific victory.

Round two proved to be harder work when light rainfall mid-race resulted in grip issues, but Jake wasn’t to be denied his second win of the weekend and he also posted the fastest lap. He ended the event with an eight point lead in the standings.

“It wasn’t easy, the Safety Car came out in the first race and there were a lot of collisions which we had to avoid. Race two started dry but then it began to rain, I lost a lot of grip and Anton was chasing me really hard – I had to really drive to keep Anton back.”

Did you take part in Movember last month?

Before you shave that moustache off - why not send Melksham News a photo of your efforts!

Or if you took part in another way, let us know!

The popular garden centre has attracted a significant number of visitors in recent weeks, creating parking problems in the area. ... See MoreSee Less

Wiltshire Council has issued a Covid Direction Order to Whitehall Garden Centre, in Lacock, to ensure it complies with restrictions to help prevent Covid-19 transmission within the county.
View on Facebook
·Share