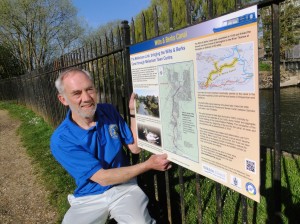 EXCITING plans to restore a former waterway through Melksham town centre are now on display alongside the river.

The Wilts & Berks Canal Trust has installed two information boards near Sainsburys and Waitrose in order to raise awareness of the charity’s vision for a new leisure and tourism attraction.

They include the history of the canal together with both the original route of the waterway which is now lost under housing and the proposed new route which would bring boats along the River Avon instead.

The route, known as the ‘Melksham Link’, would create a new junction with the Kennet & Avon Canal near Semington and then head north to Berryfield before joining the River Avon near the Challymead roundabout, where a new weir would raise the water level to allow boats to navigate through the town centre. The existing weir above the town bridge would remain exactly as it is today, but a new river lock and a hydro-electric turbine would be built alongside.

The waterway would then continue up the river before rejoining the original route north of Melksham Forest. From here, significant stretches towards Lacock and Pewsham have already been restored and reopened.

Plans are currently with Wiltshire Council while wildlife surveys and environmental studies continue. Trust volunteer Paul Lenaerts is project manager for the Melksham Link and a member of the Trust’s Melksham, Chippenham & Calne branch. He said, “Plans for bringing the Wilts & Berks Canal back through Melksham are steadily gaining momentum, so we are grateful to the Area Board and the town council for helping us to raise awareness of these exciting proposals.

“The new canal wouldn’t just be for boaters and canoeists but also anglers, walkers, runners, cyclists and people with pushchairs and wheelchairs who would all have access to a towpath which would open up the local countryside.

“There would also be huge benefits for tourism and employment – similar to those enjoyed by towns and villages along the K&A – as well as a new wildlife corridor enabling plants and animals to flourish. The Melksham Link could completely transform the town’s prospects.”

For further information on how to join the Trust, together with links to the planning application, visit www.melkshamwater way.org.uk

The website also provides details of this year’s sponsored walk along the restored section near Lacock, which takes place on Bank Holiday Monday 5th May.

Pictured: Trust volunteer Paul Lenaerts alongside one of the information boards promoting the Melksham Link