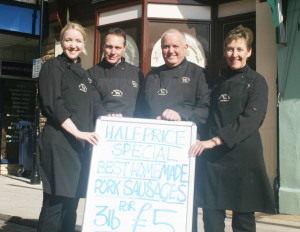 The Beatles were still topping the charts. Manchester United had just won the European Cup and Harold Wilson was Prime Minister when Ivor and Mary Newman opened their butchers shop in Melksham.

The couple had previously been running their business from premises in Lacock in what is now Watlings Jeweller and in 1969 they took over an existing butchers shop owned by Stan Hill in Church Street and renamed it I.D. Newman Butchers.

Now, 45 years later, the shop is run by his son, Michael, who joined the business straight from school in 1970, and his wife, Debbie and their daughter Laura and her husband Phil, making this a third generation family butchers.

They offer a range of prime quality beef, pork, lamb and chicken, together with their award-winning home-made sausages, burgers, pasties and pies. 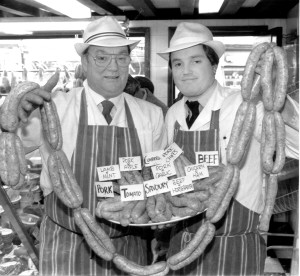 Newmans then: Ivor and Michael

“Our aim has always been to stick to traditional values,” says Michael. “And I think it’s why we’ve had such great support from people in the town over the years.

“Customers also come from far and wide, particularly for the home-made sausages and other home-made and home-cooked products like burgers, hams, pies and faggots.”

Their award-winning sausages use only the best pork and come in a variety of flavours to suit all palates including unusual varieties such as pork and chilli, lamb and mint and pork and apple.

“The secret is simply using the best ingredients,” added Michael. “If you don’t put good ingredients in, you won’t get good sausages out. All our sausages are hand-made – not mass produced and a lot of care goes into making them.”

The Newmans think the traditional family butcher still has a bright future, despite competition from supermarkets.

“Times have changed with the arrival of multiple supermarkets to the town and the change in eating habits but we have still managed to survive – and thrive,” said Laura. “At one time there were six butchers in Melksham; times change and you have to change with them.

“For instance, we’ve introduced a range of home-made pies and pasties which are really popular plus ready meals such as shepherd’s pies for people who don’t have time to cook.

“It can be difficult to compete with the supermarkets as people are so short of time these days and tend to want to get all their shopping done in one go. But I think things may be changing a little as people appreciate the quality of food we offer and are looking more closely into where their food comes from.

“We try and source all our meat locally wherever possible and that way we can be sure of the quality. And we have been making sausages, burgers and faggots in the same way for the last 45 years and long may it continue.”