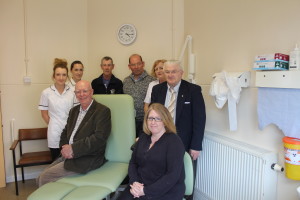 MELKSHAM Community Hospital has received a double boost after a new walk-in X-ray service was introduced and new podiatry equipment was donated.

The introduction of the walk-in X-ray service comes after a long campaign to improve the hospital’s facilities was successful. The new equipment in the podiatry department, donated by Melksham Hospital Friends, means more patients will be able to be treated in Melksham.

The new X-ray service means patients will now be able to attend the hospital without making an appointment, with the service running on Wednesdays and Fridays.

Until this was introduced, patients in Melksham would often have to wait two weeks for an appointment with the only other alternative being to travel to the RUH in Bath to be treated.

The campaign was spearheaded by Spa Medical Centre GP Doctor Rob Matthews who had concerns that despite a new upgraded digital X-ray facility being introduced in Melksham some months ago, many couldn’t access it due to long waiting times for appointments.

He felt  it would be more efficient and cost-effective for a small number of technical staff to travel to Melksham to provide a service, rather than tacitly encouraging many patients to travel to Bath.

He also made the point in his campaign that  the appointment system counters the aim of the local health groups to provide local and effective health care as the service is not used to its potential. For these reasons he made a formal request for the provision of a walk-in x-ray service – a request that has now been successful.

The hospital received a further boost with the donation of a new podiatry couch that allows patients to have their legs manoeuvred into positions that allows the medical staff to deal with any issues and is much more comfortable for the patient. This means more patients can be seen at Melksham as previously some were forced to go elsewhere for treatment.

Chairman of Melksham Hospital Friends, George Brown said, “We are very pleased to be able to help out the podiatry department and allow them to see more staff and make it easier for them to treat patients. We are keen to help the hospital and do what we can to make it more accessible and comfortable for the local community.

“The hospital’s busy podiatry department told us that they were having to refer some local patients to other hospitals because of their need for specialist couches which have ‘legs’ which can be tilted into all sorts of positions to accommodate certain patient’s particular needs. We were particularly happy when we were told that by using this kind of flexible apparatus it was much more comfortable and easier for the staff to work on their patients, so we replaced both couches in each of the podiatry rooms and we’re pleased to hear that the old couches have been put to good use elsewhere in the NHS system.

“We are always happy to be able to add Melksham’s name to any improvements at our main acute hospital, the RUH, or for that matter, anywhere else where members of our community are treated.”

Anne Howells, the podiatry group leader at Melksham Hospital said, “It is fantastic to have this new equipment and it has already been a massive help to the staff and patients. It allows us to see more patients here in Melksham and we would like to thank the Melksham Hospital Friends for their kind donation.”

If anyone is interested in joining the Melksham Hospital Friends, they should contact the secretary, Alan Weymouth, on 07982 974268.