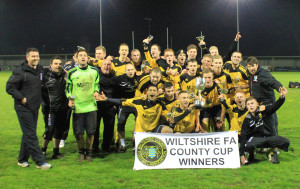 The cup success is only Melksham’s seventh in their 138-year history and ensures they are one of a few sides in the history of the competition to retain the trophy.

Town saw off local rivals Bradford Town on penalties after the tie had finished 3-3 after extra time, in a tensely fought final played at Chippenham Town’s Hardenhuish Park.

Twice Town were behind in normal time but first Dan Kovacs and then Ryan Bennett equalised as it ended 2-2 after 90 minutes. Kovacs scored again in extra-time before Bradford snatched a dramatic late equaliser to take it to penalties. Town keeper Drewitt was the hero as he saved two penalties to ensure Melksham won 3-2.

Manager Darren Perrin said, “Everyone was fantastic and did a great job for the club and can be proud of their efforts. I’m really happy as all the hard work and commitment from so many has paid off.”