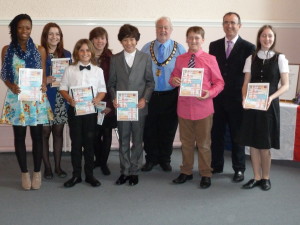 Winners of the competition.

THE Town Hall recently hosted an art competition conceived by the Melksham and District French twinning Association and offered to students at Melksham Oak Community School, on Wednesday 23rd April.

Aiden Blowers, on behalf of Melksham Oak said, “The idea was conceived by Roger and Pattie Lockett. Tragically, Roger passed away before the presentation, but as a school we want to remember the crucial contribution that he made and the impact that the event had on all of those that took part in the venture.

“The idea was that Melksham Oak students would create a picture that crystallised the essence of Melksham. The winning entry would be taken and presented to the Mayor of our twin town Avon in France. It was offered to all years and we received some truly stunning work.

“Credit must go to the students for their efforts at one of the busiest times of the year, and to the heads of art and languages, Martina Batchelor and Brian Francis who pulled the whole thing together. Fortunately the twinning association, driven by Geoff and Carole Barrington, were able to make this the stunning event that it was.

“The results were truly stunning, and as is common, it was terribly difficult to select a winner. The twinning association made their selection and those shortlisted were from these students: Nikolai Simonsen, Oliver Pearson, Aleksandra Sikorska, Cameron Macinnes, Will Cave, Lara Peacock, Alice Lyons, Sophie Haynes and Cara Wallace. 3rd place – Nikolai Simonsen, 2nd place – Lara Peacock, 1st place – Cara Wallace.

“The pictures will be displayed hopefully in the Art House Café in due course, with Cara Wallace’s winning piece being taken over to be presented to the Mayor of Avon.”