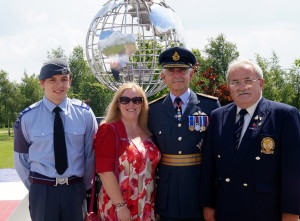 Melksham Branch of the Royal Air Forces Association visited the National Arboretum in Stafford on Friday 26th June to attend a dedication of memorial stones and crosses at the Arboretum church and the Association Remembrance Garden.

Nine Stones were dedicated at this dedication service and ceremony, two of which were for past members of the Melksham Branch, Gilbert Bourne and Mike Davey.

Gilbert flew Spitfires during the war, along with 17 other types, during and after the war, the Spitfire was his favourite, according to his daughter Mary, who along with her husband, attended the ceremony and was delighted when the Spitfire of the Battle of Britain Memorial Flight gave a flypast at the end of the ceremony.

Mike Davey’s widow, Pauline, along with her daughter Caroline, also attended the ceremony, and were also delighted with the Spitfire flypast, as the Spitfire was her late husband’s favourite aircraft.

The service was conducted by the Padre of the nearby RAF Cosford, and the President of the Royal Air Forces Association, Air Vice Marshal Sir Dusty Miller led the dedication of the stones at the Association’s Remembrance Garden.