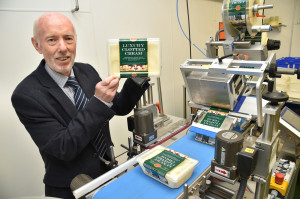 The humble pot of British clotted cream is now finding its way into Hong Kong high teas and the coffee shops of South Korea, thanks to Wiltshire dairy product business Coombe Castle.

And the burgeoning world-wide demand for the cream, a key ingredient in traditional English cream teas, has led to a complete re-think of packaging for Coombe Castle.

The firm is now moving from using glass pots to recyclable plastic pots to meet consumer demand thanks to an £80,000 Rural Economy Grant, administered by Wiltshire Council through The Enterprise Network Swindon and Wiltshire.

The money allowed Melksham-based Coombe Castle to bring forward its plans to invest in essential new equipment to improve its packaging and branding of clotted cream, by five years.

Glyn Woolley is the owner of the dairy products business which he launched in Corsham 30 years ago. Since then, the company has won three Queen’s Awards for International Trade and exports to more than 30 countries. He said, “The growing demand for our long-life clotted cream around the world has been astonishing. The coffee shops in Seoul can’t get enough of our clotted cream and it’s already on the menu of the Beijing Raffles hotel and the Ritz Carlton Hong Kong where recent word of mouth from the chef means it will soon be served at the Ritz Carlton Shanghai.

“The Dutch and Americans love it too – although the Americans don’t like it with its traditional crust topping!”

But changing consumer demand and the need to reduce weight for international distribution (not least for airlines like Cathay Pacific which serves Coombe Castle clotted cream on its flights) meant the company had to completely re-think its packaging.

Glyn Woolley said, “We knew we had to move to offer a wider range in size of packaging, and from glass to plastic – but we needed to invest in the right specialist plant to do it. Without the £80,000 grant, we would have had to wait for five years – and the moment would have passed. It was a very bold move, to change the way we packaged our product, and we had to be able to ride the wave of changing demand quickly. The grant played a key role in helping us ride that wave.”

Funding for the Rural Economy Grants came from the EU via Defra. Glyn Woolley added,  “Knowing that Wiltshire Council can access this sort of EU funding through Defra is an amazing opportunity for rural businesses like ours. It’s incredibly valuable for businesses to know this sort of support can be available – more people need to know about future grants.”

By investing in new packaging and expanding to new markets, Coombe Castle hopes to safeguard its existing 30-strong workforce and expand to employ at least five more.

Coombe Castle processes primary produce raw cream and also buys and sells cheeses through its distribution network, supporting a range of producers and other exporting companies. The business has helped other Wiltshire companies – confectionary, jams, pickles and biscuits – to get into export markets by ‘piggy-backing’ their products to the USA.

Julian Head from Wiltshire Council said, “This particular scheme has now closed for new applications but we’re hoping to start offering similar rural economy grants through the LEADER and the Swindon and Wiltshire Local Enterprise Partnership’s European programmes from 2015. In the meantime, businesses looking for grants should contact the Wiltshire Business Support Service, part of The Enterprise Network.”