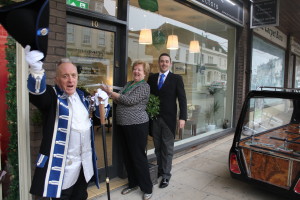 THERE was a rare chance to take a glimpse behind the scenes at a funeral directors which has just opened in the town.

John Stuart Funeral Directors hosted an open day as part of their launch and opened their doors for people to have a look around.

The ribbon was cut by the mayor, cllr Terri Welch, to formally open the funeral directors as Peter Dauncey, the town crier, also welcomed the opening of John Stuart as part of the ceremony.

Residents had the opportunity to view the new premises, including the arranging room, Chapel of Rest and mortuary, which was formerly home of Middle Eastern gift shop Nabreal. They were also able to meet the John Stuart team .

“It’s great to finally be able to open our new branch,” said funeral director Paul McDonald. “Throughout the process of fitting the branch, local residents have taken a real interest in our progress. One of the things that became apparent to the team is that people have both curiosity and preconceptions about how a funeral business works and what happens behind the scenes. So, when it came to celebrate the opening of the branch, one of our staff suggested hosting an ‘access all areas’ open day so that the community could see a side of funerals they wouldn’t normally be able to, and also have any of their questions answered.”

The event was also attended by Reverend Barry Blackford, who dedicated the Chapel of Rest, and Paul Cuthell, the president of the NAFD, the National Association of Funeral Directors. A number of experts were also on hand to offer advice on pre-paid funeral plans and estate administration.

A unique motorcycle hearse was also on display and it caught the attention of many shoppers in Melksham.

“Although we have conducted funerals in Wiltshire for over 25 years, we’re pleased to now have the opportunity to provide better support to families in Melksham,” concluded Paul.