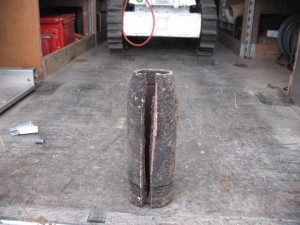 A World War 1 bomb shell was unearthed by an excavator at a house in Church Walk, Melksham, last week while construction work was being carried out.

To avoid any problems at Church Walk, the find was removed to a place of safety at a yard at Roundponds Farm. The police were informed, who photographed the item and passed it on to the Royal Logistic Corps (RLC).  The following morning, a bomb disposal team from the RLC arrived from their base at Tidworth.

The officer attending described it as an 18 pounder World War 1 shell.

RLC Bomb Disposal are available to give talks to local schools about their work, helping to educate children about the dangers of devices that are still being found.