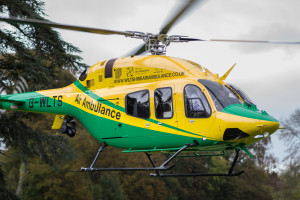 WILTSHIRE Air Ambulance (WAA) is gearing up to commence operations with its new helicopter early in the new year, and has recently week welcomed back  Devizes pilots George Lawrence and Nicky Smith following intensive familiarisation training in Slovakia.

The original intended start date for the new helicopter, a Bell 429, has slipped a little from 1st January 2015, by a week or two, following the end of the existing joint Wiltshire Police helicopter and air ambulance on 31st December 2014.

The transition from the joint helicopter, the MD 902, to the stand alone Bell 429 is a complex series of interlinked events – all rightly subject to a whole raft of safety regulations.

David Philpott, WAA’s chief executive said, “Because we wanted to maintain cover over the busy Christmas period and get maximum cost efficiencies out of our current contract which we share with the police, there will be a delay of a week or so while we enhance our safety training on the Bell 429 and satisfy the Civil Aviation Authority of our mission readiness.

“We take the safety of our crew and passengers very seriously and categorically will not compromise in this vital area. We are confident, however, that the people of Wiltshire will still have robust air ambulance cover which will be provided by neighbouring air ambulances.”

In addition WAA Critical Care paramedics will use the Rapid Response Vehicle (RRV) to attend emergencies while the helicopter is not flying. The RRV is based at WAA Operations Centre at Wiltshire Police Headquarters, Devizes.

Once operational, the Bell 429 will fly up to 19 hours a day. Initially it will operate in the daytime with night flying commencing in late Spring 2015. This is to allow the pilots to accumulate experience with the aircraft and operating area while at the same time training for night flying.