Continued success a year on for Dragons Den’ entrepreneur 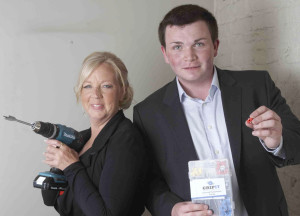 Jordan Daykin entered the Den early last year where he secured an £80,000 deal with Deborah Meaden and since then he has seen his business grow further than he ever could have imagined.

The teenager set up ‘Grip It’ which specialises in an innovative plasterboard fixing which Jordan invented with the help of his grandfather and thanks to the help of Dragon Deborah Meaden it has grown massively. Jordan has recently opened another unit in Melksham with a larger workforce, the majority of which are local.

Jordan said, “I could not have imagined 12 months ago where the business is today. In the last year my life changed so much and the business has grown massively with the product going from being in 500 stores to just under 2,000. I never thought we would have a Dragon on board and thought we would just be slowly growing.

“The success has allowed us to open a new unit and hire more staff with all of them being local. It is great to be able to provide jobs for local people and something I am proud of.

“On the business side the last few months have been very positive and I hope to grow further in the UK before expanding into the US and Australia.

“The only slight issue has been regarding my mother which led to some negative publicity. Thankfully that has now been dropped and it has not affected me or the business.”

Grip It was also listed in the O2 Smarta 100, a list of some of the country’s best small businesses.