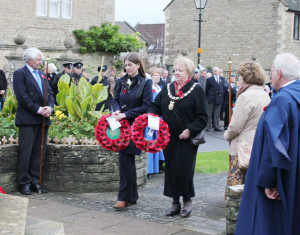 HUNDREDS of local people turned out to pay their respects at the Remembrance Sunday Parade and service on Sunday 8th November.

The annual parade started on King Street just after 2.30pm and marched to St Michael and All Angels Church, past rows of residents wearing poppies in remembrance of those who have died in war.

A service was then held at the church, before wreaths were laid on the cenotaph in Canon Square. Wreaths were set down by  a number of local groups and organisations, as well as local dignitaries including Mayor of Melksham, cllr Terri Welch; cllrs Richard Wood and Roy While of Melksham Without Town Council; and Chippenham MP Michelle Donelan.

President of Melksham’s Royal British Legion branch, Trevor Paterson said, “It was an excellent day and we have had many comments from people on how well they thought it went.  It was great to see such a large crowd of people turn out.

“Each year more and more people seem to be taking part and it’s lovely to see the town coming together.

“We were particularly pleased with the band and have booked them for next year. They led the parade brilliantly and really made a difference to the whole thing.”

A smaller service also took place at 11am on Wednesday 11th November, to mark the true Armistice, Remembrance Day.

Trevor continued, “The service on Armistice Day also was also a success and well attended. It was lovely to see students from Manor School and River Mead School who laid wreaths.

“The Co-Op Funeralcare put on an afternoon tea following the service, which was very kind of them.

“Thank you to everyone who supported the remembrance events.”

Community should be ‘proud’ of pandemic volunteers.

The work of the Melksham Community Support volunteers has been hailed as something the whole town should be proud of, by a local councillor.

The SW in Bloom - Melksham group had their first Zoom meeting of the year on 10th February.