Melksham schools show their support for Children In Need 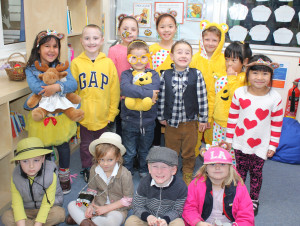 SCHOOLS in Melksham have shown their support for Children in Need this year, by dressing up and organising various events to raise money.

Forest and Sandridge School Council had the task of deciding what the day’s theme would be. Joint chairmen of the school council, Evisha Pearce and Tilly Birkell said, “We wanted to do something a bit different this year so decided on the theme, ‘wear your pyjamas to school.’ It is important to get involved with Children in Need because it helps so many children who are less fortunate than ourselves.”

There was a pirate invasion at River Mead School on Friday as staff and pupils dressed up as pirates and donated £1. Head boy Ben Durrant had been very busy fundraising for Children in Need. He said, “I’ve been baking cakes, making posters and writing letters, all for Children in Need.

“I wanted to get involved because it looked like fun but also some children aren’t as lucky as we are so I wanted to do something to help.”

Children also got the chance to vote for a teacher to ‘walk the plank’ into a paddling pool of icy water. Headteacher Nicki Henderson was unanimously voted to take the plunge. In total, River Mead raised £302.47.

Aloeric School also got involved with the fundraising, with every class taking part in an event during the day including a nature ramble and a treasure hunt. They raised over £600.

Assistant headteacher Ms. Jeffries said, “I’m very proud of all the children and the money they’ve raised but mostly I’m so proud of how engaged they are when thinking about why we raise the money.

“When you speak to them about why Pudsey visited the school, they understand the reasons why. Having this sort of thinking will continue through the rest of the year. They are fully aware of why they are doing it which is fantastic. We have also had great support from parents as well.”