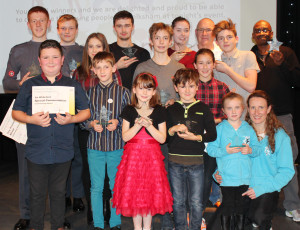 Some of the winners of Melksham Young People’s Awards 2015

AWARDS and commendations were given out to some of Melksham’s most inspirational young people last week for their achievements and community contributions.

The fourth annual Young People’s Awards ceremony was held at Melksham Assembly Hall on Wednesday 2nd December, and accolades were given out in 15 categories.

“It was a fantastic evening to celebrate the amazing achievements and efforts of these wonderful young people,” said Jon Hubbard, chair of Young Melksham, which organises the awards.

“We rarely get to hear about the fantastic things our young people do and I am continually blown away by the quality and standard of the nominations we receive every year for the Young People’s Awards.

“I am so proud of everyone of not just the winners, but also all of the nominees – they all had special stories and I am gutted that we can’t give a prize to every single one of them.

“We must also remember that there are loads of other young people who are doing amazing things and contributing so much to our town and wider community. I have never been more proud to be a representative of this community than when I am stood shoulder to shoulder with these amazing young people.”

Young Melksham’s awards and citations were given as follows:

Qualifying for the European golfing championships in May and achieving the 5th best round of the tournament on the day, has qualified Laura to play in the World championships at Pinehurst, North Carolina.

Drive, determination and dedication won this 11-year-old the title of best improved under 18 girl golfer for the whole of the South West.  Qualifying for the national final at Royal Cromer Golf course in Norfolk, she was the youngest girl in the competition, coming joint second and finishing just one shot behind the winner.

She recently sett the ladies course record of 79, just 9 over par at Whitley Golf course and is a member of the county under-18 girls elite squad where she has competed in this year’s Inter County Championships

Not being content with winning both the under 16 and adult Wiltshire Championships last season, this football club also went on to win the Wiltshire Council Most Inclusive Club award.

Over the past four years, this team has worked together incredibly well which has resulted in some amazing results, winning the 2012/13 and 2013/14 mid-Wilts leagues and runners-up in the U14 age group.

Playing football and winning matches is important to the team; over the past four years their commitment to their sport and to each other is evident.

They have developed a great team ethos where they work closely together both on and off the pitch.  The team’s superb effort, enthusiasm and sportsmanship has often put opposing teams in the shade as their behaviour has been exemplary.

Lauren has worked so hard to get where she is now.  She passed all her grades in gymnastics and passed all her ballet exams.  She has sometimes lacked confidence in her singing ability but passed her Grade 5 Trinity College exam with distinction.

Her dream and passion is to perform on stage; in 2015 she had the lead role in the Stagecoach production of Chicago. She has never given up and through sheer determination and ability she is now at the Wilkes Academy of Performing Arts.

Providing entertainment at public events such as carnivals or local fetes, this team loves to perform to the very best of their ability.

Enigma Twirl Team work together, learning and building relationships and developing confidence and ability in their chosen sport.

After watching a children’s television programme, Grace decided to raise money for the Little Princess Trust.

This little star decided that she didn’t need all her hair and donated 16 inches of it to the charity.  This was a very big decision for her as she loves her hair and she did fear that people wouldn’t like it short. But she was determined to help.  Her target was to raise £150 which would go towards a wig for children with cancer.

She campaigned and through her selfless act she raised just under £600 which meant that she had managed to raise funds for two wigs.

Her wish was to help make life as normal as she could for children who have lost their own hair because of the treatment they have received.

Her mum summed it up, “She has a kind heart.”

John has led a campaign in his local neighbourhood and at school to publicise and campaign against the closure of his local park.  He has organised petitions, spoken to school assemblies and the local press, raised awareness and action amongst his local community.

Although a fairly quiet person, he was brave enough to talk to the school in assembly and to take his campaign to the council and other local community groups.

George joined Broughton Gifford Scouts in 2014 and has thrown himself into every activity put before him.  He finds activities more challenging than his peers but this has not prevented him from trying everything they do.

A couple of highlights of his achievements include completing the 2-day, 50-mile cycling expedition and attending 5 days of summer camp this year which included mountain biking, hiking, caving and gorge walking.

His scout leader says that he gives the best fist-bump!

These young people took on a major challenge this year in deciding to join a team of air cadets who were participating in the 100-mile Nijmegen Marches in Holland.

Max and Tony dedicated themselves to 7 hard months of training to prepare for the event which took place in July this year.

Developing skills in teamwork and self discipline helped these young people complete this massive challenge; what an amazing achievement!

This group of young people volunteer their time to teach the young swimmers at their local swimming club.  They help at school games swim finals and have completed the Young Volunteer Aquatic Organizer Award. They have also completed the Wiltshire ASA Young Volunteer Award which involved 25 hours of various activities.

For raising money for the Wizzybug charity which is a scheme for loaning wheelchairs to under 5s.  Jai has helped raise £1,500 for the charity and continues to think about fundraising ideas to help children.

Christian is an exceptional young man who consistently gives up a lot of his time in order to support his school.  He is quick to help others and rather than join in with the school’s wake and shake, he listens to readers, plays maths games or supports children in maths targets each morning, even though he loves dancing.

He has demonstrated and encouraged others to participate in ballet as he is incredibly passionate about this and is an excellent ballet dancer himself.

He actively seeks out ways in which he can make the school a better place for others; he visits each classroom and asks for feedback after class council meetings and takes this feedback to the school council.

Christian is an exceptional role model for others; children are keen to join the school council because of his enthusiasm and passion.

Leadership started at the age of 11 for Maisie in the Melksham Rainbows and Brownies.

In addition to embarking on completing her Guiding Adult Leadership qualification, she also takes an active leadership role within the community, taking up the post of co-chair of the Local Youth Network which seeks to give young people a voice. She continues to inspire to achieve and her supportive nature to all members of girl guiding and her active participation in the community makes her a credit to Melksham.

Special Recognition for their contribution to our community: Maisie Marchant, James Wilkins and Cavan Wright.

These young people volunteer their time to attend the Local Youth Network management meetings to ensure that the voice of young people is heard and to help improve activities and opportunities for the young people in the area.

They have shown commitment and enthusiasm about bringing activities into the newly opened Canberra youth centre and the youth clubs.  They work with Young Melksham to help spread the word about the activities that Young Melksham provide for the children and young people in the Melksham area;  always ensuring that the voice of young people is heard.