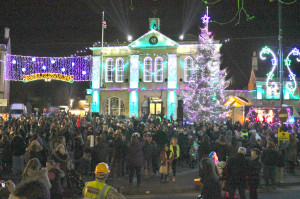 Melksham’s Christmas Lights are switched on

THOUSANDS of people turned out in force to support Melksham’s Christmas Fayre and the official switching on of the town’s Christmas lights, which have been hailed as the best for miles around.

The festivities started in the afternoon with a large crowds enjoying the Christmas Fayre in the Assembly Hall and in the Market Place.

Attention then turned to the Market Place as Father Christmas arrived in style on the Melksham Lions’ Christmas float, led by the town crier Peter Dauncey. Queues of children waited patiently to meet him at his special grotto which had taken up residency in the Town Hall.

As 5pm approached, thousands gathered together for the count down to the main event. The lights were turned on by Mayor Terri Welch; five year-old Face of the Globe finalist Aaliya Green and Emran Iljazi who has always wanted to switch on the lights. He also celebrated his birthday on the day and as a special birthday treat, the crowd sang Happy Birthday to him.

As the lights were switched on, a fireworks display took place over the Town Hall, with artificial snow also falling from the sky.

“It was wonderful to see the thousands of people who came to enjoy the switch on, and I was really pleased with the road closure, it made a huge difference and allowed the crowd to fill the whole Market Place and all down the High Street.

“Everyone in town is saying that it was superb. Christmas is a wonderful time to be in Melksham! The lights, as always, knock spots off most other local towns; Melksham is again showing the rest of the county what Christmas lights should look like!”

Locals who turned out in force to enjoy the occasion had nothing but praise for the team of volunteers who make Melksham glow at Christmas. Melksham resident Danielle Horscroft said, “I must say, being at Melksham Christmas lights switch on certainly makes me proud to say it’s my home town.” Bev Viveash said, “Fantastic, absolutely fantastic. Melksham at its best.” Jo Albone said, “The lights look great once again. Our friends from Devizes were so impressed. They said they are much better than their town! Thank you to everyone for their fantastic work.”

Paul Weymouth from Melksham Christmas Lights group said, “A big thank you to Melksham and to a lot of people from other towns who came along on Saturday. We were totally amazed by the sheer volume of people that crammed into the town centre, it was brilliant!

“We would like to say thank you to a lot of people, especially Alex Goodhind for doing an exceptionally long day, Miriam Zaccarelli for all  her help and for doing everything that we forgot, Distant Thunder Fireworks for as always doing that little bit extra for us, and of course all our sponsors, helpers and the small team of volunteers who helped bring all of it together. We hope you all enjoy the lights!”

For more information visit www.melkshamchristmaslights.com or see their Facebook page.