Award for achievements of canal volunteers 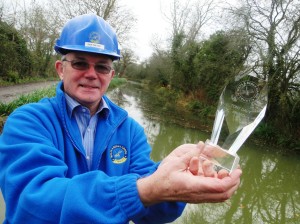 Dave Maloney, chairman of the Melksham, Chippenham & Calne branch of the Trust, with the Tony Davy Award

DEDICATED volunteers have received special recognition of their progress in restoring a former Wiltshire waterway.

The Melksham, Chippenham & Calne branch of the Wilts & Berks Canal Trust has been presented with the annual Tony Davy Award.

The engraved crystal – named after the charity’s first chairman – is presented to the branch whose volunteers donated the highest number of hours in the previous year.

Supporters provided 8,860 hours of their time with an estimated value of £146,000 when applying for ‘matched funding’.

This is a massive leap from the 6,594 hours with an estimated value of £95,365 the year before, and is the fifth year in a row that the accolade has been presented to the local branch.

Branch chairman Dave Maloney said, “This award is a marvellous tribute to all of our hardworking volunteers, not only those involved in the physical restoration of the canal but also those who help with our fundraising, talks and other events.

“It also clearly demonstrates the increasing level of public support for the charity’s campaign to bring this wonderful waterway back to life.

“Most of the hours are donated to our regular workparties where people enjoy the outdoor activity and the exercise. These ‘dirty boots’ volunteers include plumbers, electricians, teachers, civil servants and students. Some want to get involved in specific areas such as bricklaying or vehicle maintenance while others simply enjoy cutting the grass!

“But we’d also love to welcome more ‘clean boots’ volunteers who can help with big public events such as the Melksham Food & River Festival and Chippenham Folk Festival, or manning stalls and displays.”

Much of last year’s volunteer activity was centred on the open countryside between Melksham and Chippenham, where the towpath has been improved and a culvert rebuilt.

One of the lock chambers has been completely cleared of debris for an investigation by engineers prior to the next stage of restoration, and local youth groups have been involved in planting trees and bushes to repair hedgerows.

Dave added. “Now is a great time to join the charity and get involved in the next stage of the campaign.

“One of our biggest tasks will be the restoration of the top of the flight of locks and the rebuilding of the lock-keeper’s cottage, but we’ll also be continuing our clearance along other parts of the line and commissioning more environmental surveys.

“There are so many ways in which people can lend their support, and every hour is always appreciated.”

For further information on joining the local branch, email dave.maloney@wbct.org.uk

The aim of the Wilts & Berks Canal Trust is to restore the waterway from the Kennet & Avon Canal near Melksham to the Thames & Severn Canal near Cricklade and the River Thames near Abingdon, connecting Chippenham, Calne, Royal Wootton Bassett and Swindon.