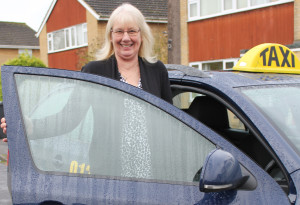 AFTER 22 years of running A&P Taxis, Ann Fernandez is ready to retire and enjoy some  time to herself.

Ann has been part of the community for many years, 35 to be exact. In 1980 Ann and her late husband Philip opened an Off Licence and General Store in King Street, then in 1993 they started A&P Taxis.

Ann said, “It was Phillip who wanted to start the taxi service, I wasn’t that enthusiastic about it really. I remember saying to him, I will not drive a taxi, I can sort out the paperwork side but I’m not driving. Then it wasn’t long before I was behind the wheel and doing the school run!”

Having started with one car, things quickly progressed and they soon had seven taxis. In 1999 they closed the shop and moved  A&P Taxis to their home address where it’s been ever since.

But now Ann has taken the decision to sell the business and opt for a quieter life with her partner Fred, who has been a great help running the business over the past seven years.

Ann continued, “I’ve been ready to retire for a couple of years but it’s hard to let it all go, but now I’m ready. I will definitely stay in Melksham, I was born here and wouldn’t want to live anywhere else. I’ve been part of the town for a long time so wouldn’t want to leave.

“I have enjoyed running A&P Taxis and have had  great drivers working for me over the years; Nigel has been with me for 20 years and Malcolm 11. They have always been there to help out when I needed them and I’m very grateful.

“I’d like to thank all my customers from the last 22 years. I will miss the contact with people, but I look forward to not being tied to the phone.

“I haven’t got anything planned, which is quite nice actually. We will see what happens.”