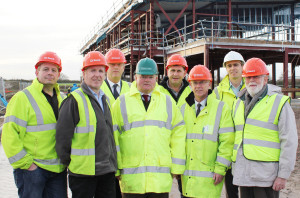 BUILDING work is progressing on schedule at Woolmore Farm and Wiltshire Council is confident the new sports facilities will be ready to use for the 2016/17 season.

Construction is well under way on the £7million state-of-the-art football and rugby facilities, which are being provided as part of Melksham’s campus project.

Wiltshire Council’s cabinet member for campuses, councillor John Thomson said, “It’s really good to see the progress being made on these new facilities. We have committed significant investment into this project to deliver new sports facilities, the Market Place re-development and a health and wellbeing centre for the Melksham community.

“Woolmore Farm is the first phase of this project and I’m looking forward to seeing the project progress next year.”

Work began in the summer after the project was stalled by the discovery of a protected species of newts living on the land. The foundations, steel frame and the pre-cast concrete base for the spectator stand are now complete, and it is hoped the new grounds will serve the community for many years to come.

Members of Melksham’s football and rugby clubs joined local councillors and council officers to see the progress for themselves in December.

Dave Wiltshire, chairman of Melksham Town Football Club said, “This brilliant facility will enhance the work we are already doing to make this a superb community football club. We already have nearly 600 players signed on, and we really need this. I’m amazed by how it is looking already and can’t wait to see it finished.”

Pat Holtom, chairman of Melksham Rugby Club said, “This is a fantastic opportunity to grow rugby in the town. I’m looking forward to more and more people getting involved including volunteers, parents and of course players. A big thanks must go to everyone who has helped make this a reality.”

Wiltshire Council is moving forward with final plans for the Melksham House project, and Melksham Area Board last month signed off the proposed Market Place redevelopment plans, and work is expected to begin there in the spring.