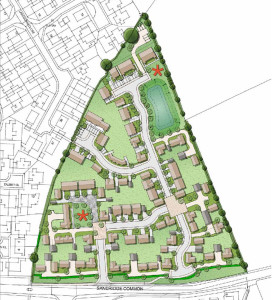 A plan of the proposed Sandridge Common development

ANOTHER new housing estate could be built on Sandridge Common after a developer recently applied for permission to build 100 houses on a field opposite Skylark Road.

Cheltenham-based housebuilder Robert Hitchins Ltd submitted the application in December and a public consultation will run until Friday 29th January.

If granted permission, the company could build up to 100 houses on the approximately eight-acre site to the north of Sandridge Common.

The application was submitted in the same week that permission was granted for 24 new homes to be built across the road on Fieldfare Way.

All new houses will contribute to Wiltshire Council’s target to build over 1,000  new homes in Melksham between 2014 and 2026.

The proposed build would be next to the newly built Thyme Road area to the east of the town. A recent decision by Wiltshire Council saw Melksham Town Council take authority over the area, previously part of Melksham Without.

A few residents have already written to the council with concerns about traffic, flooding and the loss of countryside.

One local man said, “The development is not needed and not welcome and the building of more houses would not compensate Melksham for the loss of more open land.

“The open space currently provides a pleasant barrier between Sandridge Road and the houses surrounding Lansdown Close where daylight and privacy can be enjoyed by all. The proposed development would destroy the appearance of the area and the tranquility for the many elderly residents nearby.”

To view and comment on the full plans enter reference 15/12454/OUT in the planning search at www.wiltshire.gov.uk