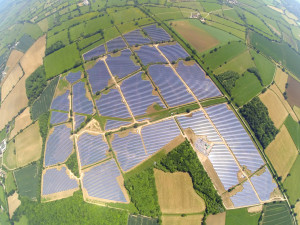 A 200 acre solar farm has been built to the east of Melksham and is up and running in time for summer, despite Wiltshire Council refusing to give planning permission.

The 49mW installation – which gained planning permission on appeal – is roughly the size of 100 football pitches and took four months to build. It is now capable of producing enough renewable energy to power 11,000 homes – almost the entire of Melksham Independent News’ coverage area.

The installation – among the biggest in the country – divided opinion during planning, with Melksham, Melksham Without, and Bromham councils in favour of the development, while Seend, Wiltshire Council, and a number of local campaigners against it.

Wiltshire Council refused planning permission amid concerns that the huge development would dominate the landscape and have a negative impact on those living in the area.

The developer then won an appeal against the decision and built the farm over the winter.

It is the largest installation completed to date by its owner Goldbeck Solar.

Local councils are expected to benefit from around £44,000 per year in community contributions from the firm; a possible £1.1million over the solar farm’s 25-year lifespan.