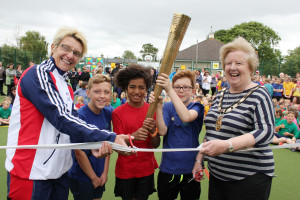 Rachel Bown and Mayor of Melksham, Terri Welch, with (l-r) Callum, who named the court, and sports ambassadors Abigail and Jarret

A TEAM GB triathlete recently opened a new sports court at River Mead School in Melksham as pupils took part in their first sports day in the new arena.

The new court was opened earlier this month by triathlete and Olympic torch bearer Rachel Bown and Mayor of Melksham, cllr Terri Welch, as pupils, parents and staff gathered for sports day.

Headteacher Nicki Henderson said, “The opening and sports day went really well. We’re thrilled with the new court and the children are delighted that they have somewhere safe and open to play.

“It’s a totally new facility for them and has nearly doubled our outdoor learning space. We now have a flat space for them to play football and room to try new sports like the javelin, which we couldn’t have done before. It really will have a massive impact on what we can offer the children.”

After the sports day Rachel Bown, a Trowbridge-based triathlete who competes for Great Britain and was a torch bearer for the 2012 London Olympics, chatted to the children. Rachel brought a genuine Olympic torch to the opening, and spoke about how she has continued to compete despite losing 90% of her sight because of a brain tumour.

“We all really enjoyed Rachel’s visit,” Nicki continued. “The children related to the values she spoke about; the focus on respect and inclusion is what underpins our school ethos, so it was important for them to hear that.

“It was inspiring, too, to hear her story about how she overcame adversity and is so determined to be the best she can.”

The new games area will be exclusive to the school during teaching hours, but will be available for public use in the evenings. The court was paid for using council money set aside when former school buildings on the site were demolished.

It was named Kingfisher Court after pupils voted for the name in a ballot on the same day as Britain’s EU referendum.

Community should be ‘proud’ of pandemic volunteers.

The work of the Melksham Community Support volunteers has been hailed as something the whole town should be proud of, by a local councillor.

The SW in Bloom - Melksham group had their first Zoom meeting of the year on 10th February.