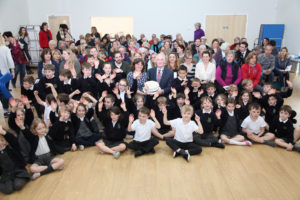 PUPILS past and present of St Mary’s Broughton Gifford Primary School came out in force last month to celebrate the school’s new-look and brand new hall.

The refurbishment of the school and building of the new hall was made possible by a  £750,000 investment as part of the Government’s £466million ‘Condition Improvement Fund’, which aims to ensure that children across the country enjoy good quality school buildings which are safe and fit for learning.

“It has transformed the learning environment for the students,” said headteacher, Pauline Orchard, “and it has given the staff a fresh and modern place to work in.

“The school is beautiful and beyond recognition! I’ve been taking photos and keeping a record of the progress of the build since it began last year in the summer. It will be an historical record that can be kept at the school for future students to read and learn about how their school came to be.”

To celebrate the new-look school, parents, past pupils and the community were invited to the grand unveiling of the hall. Former headteacher, Malcolm Edgar, who worked at the school from 1980 to 1999 was invited to officially open the hall.

“We wanted someone who had history with the school to open the hall,” said Pauline. “We shared the event on Facebook and people who no longer live in the village came along to the opening just to see Malcolm! He was very popular.

“The reaction to the school has been tremendous. The school still looks the same on the outside, so visitors couldn’t believe the changes that have been made.”

At the celebrations, some of the students came dressed as pupils from the Victorian era, as an acknowledgment to when the school first opened, in 1853.