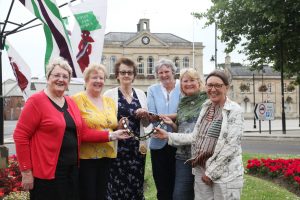 TO mark the centenary of the first British women to get the right to vote, Melksham News gathered the past and present female mayors of Melksham for a special photo and to talk about the role of women in local politics.

Since 1985 when the first Mayor of Melksham was elected by the town council, there have been seven female mayors, totalling 20 years in office between them. Of the seven mayors, six still remain in the town. Former mayor, Sheila Wilkinson, died in 2014, at the age of 90.

The first female mayor was Mavis Elcock who held the position for two years in 1987 to 1989. “It didn’t make any difference being female,” said Mavis. “It was just a brilliant time for me as I didn’t realise that there was so much going on in Melksham and I learnt about lots of people and lots of organisations. There is no need for anybody to say, there’s nothing to do in Melksham, because there is. I had a brilliant time, but I couldn’t manage it again, I’ll leave it to Adrienne!”

“I think that without that broad spectrum that you get from female councillors and female candidates, politics and councils lose a lot.

“I go in and I see a room full of middle-aged white men and I’m quite saddened that they are making decisions about young families and about all the things that women feel passionately about, but they (women) are not there to represent their views.

“I’m often asked what inspired me to become involved in local politics, and I think it goes back to the fact that I’m passionate about where I live and therefore I feel I can make a difference, and as a female voter  I think that’s really important – it’s about women making a difference and I’m a huge feminist.”