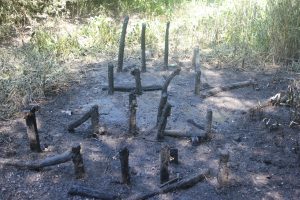 The aftermath of the fire

VOLUNTEERS were left disheartened after another bout of vandalism hit Conigre Mead nature reserve last night, that saw a fire cause the complete destruction of the newly installed platform across the pond.

The fire brigade were called to Conigre Mead nature reserve last night at around 11pm, signalling a fire attack on the newly installed platform, that people can use to enjoy and look out across the pond.
Volunteers spent days installing the new platform, made of re-constituted plastic, back in the winter months delving waist height into icy cold water in the hope that it would bring something special to the nature area for all residents of Melksham to enjoy.

This is the second time in a few months that this area has been vandalised, with another fire incident happening in May this year where a group of vandals stole a brand new bench pieces of timber and dead wood and young trees and then setting fire to them.

The recent fire was spotted by local resident Linda De Santiz who was returning home after walking this years Melksham in Bloom route in preparation for judging next week.
Linda said, “Kathy (Iles) and I were walking the bloom route, for about three hours, watering the plants and we finished around 10.30pm. As I was walking home I spotted plumes of smoke coming for the Church Street direction, so belted it through the cemetery whilst calling the fire bridge.

“I had a feeling it was coming for the nature area, flames were high in the air. When I got there, I knew it was coming from the pond dipping area and it was the platform that was on fire and some vegetation surrounding it.”

The Fire brigade came within approx half an hour after the alert. However, with the area being enclosed, it proved difficult for the fire engine to park nearby. They managed to park at Sainsbury’s car park and run the hose through.

“The area is a keen interest of this years bloom trail and unfortunately the judges cannot take this situation into consideration, the same happened with the tree in the market place last year.
“I am really upset, I do a lot for the town and it is sad to see people doing this.”

Pete Colegate who alerted Melksham News to the incident and is a volunteer at the nature reserve said, “The platform was made of reconstituted plastic so it should have been tough and resilient to burn, so they must have used petrol or some kind of accelerant, to light it.

“I have volunteered for many years. Me and my wife are devastated, it just shows the job we all have in this town to tackle vandals to get it looking up to standard. It’s demoralising. We are in two minds now as to whether we should carry on. We had plans, alongside the Cardy’s – who also look after the area, to put in another bench but now, we wouldn’t know how long it would last. It’s depressing and we are gutted.”

Wiltshire Wildlife Trust, who met Melksham News at the scene today are thankful that Linda was able to ring the alarm before things got out of control. Neil Pullen, Nature Reserve Manager said, “This area was installed for people to enjoy but now it has gone it hasn’t just had an impact on the people, but the nature too.
“The tree behind is destroyed and we will need to get a surgeon in to chop down the burnt areas. The tree now will have half the foliage it did the year before and as a trust we don’t have the funds to fix it.”

Ashley White, the Reserves officer continued, “This is the second arson attack we have had in a short space of time here at Conigre Mead. This incident was very worrying as it could have easily got out of control.
“It’s amazingly disheartening. People raise funds around the town for things like this and now it has been lost. We are worried now what will be next.”