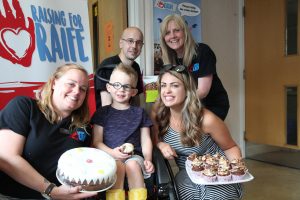 Building society pledges to raise £25,000 for Melksham boy’s operationA MELKSHAM family determined to raise £45,000 for a life-changing operation for their little boy, have received welcome support from local building society, Nationwide, who has made ‘Raising for Raife’ their charity of the year.

Staff at the Melksham branch, along with their colleagues at branches in Chippenham, Devizes and Swindon, have pledged to raise £25,000 for the Melksham charity.

‘Raising for Raife’ is the charity set up by the family and friends of three year-old Raife Wilson, who was born with cerebral palsy, a condition which affects movement and co-ordination, making it hard for him to balance.

It is hoped that £45,000 can be raised to pay for selective dorsal rhizotomy (SDR), a special operation not currently available on the NHS, that will help him walk on his own.

Since late 2016, ‘Raising for Raife’ has held a number of charity events including a children’s summer party, a supermarket bag pack and a fun run,  and has so far raised nearly £22,000. Raife’s mother, Laura Wilson, says that if Nationwide staff are successful in reaching their target, they will have enough money to pay for the operation and Raife’s aftercare.

Speaking to Melksham News at Nationwide’s ‘Raising for Raife’ cake sale earlier this month, Laura said, “The staff here at Nationwide have been amazing, they basically want to try and raise what is left, which is crazy!

“Organising all the fundraising events last year was a lot of work for me, and with Raife, a baby and an older child as well, you can imagine time-wise, that was a lot to fit in. So these guys (Nationwide) have completely taken the pressure off, which is amazing. It’s still sinking in!

“I’ll still organise a few smaller events, like the supermarket bag packs, but I’ll concentrate now on helping Nationwide with their events.”

Nationwide’s pledge to raise £25,000 has kick-started a new phase for ‘Raising for Raife’, which took a back seat  to Raife’s health towards the end of last year.

“Raife had major brain surgery at the end of last year,” explained Laura. “Doctors found a massive cyst on his brain, so he now has a shunt behind his ear and into his tummy. So it all took a back seat as he was quite poorly and it was a bit of a drama. But we are back on it now and feeling good.

“Raife also recently had surgery on his legs – botox injections. We will hopefully see a temporary improvement in his mobility, and this will also be a good indication as to how he’ll react to the SDR.”

Nationwide began fundraising for ‘Raising for Raife’ at the beginning of May. A number of events have been planned including a family day in August and manager of the Melksham branch, Carlie Brenton, has also signed up to take part in a skydive in September.

“I’m scared,” said Carlie. “I don’t like heights! I used to be fine when I was younger, but now it freaks me out.  Hopefully it will get people talking, ‘branch manager jumps out of plane for local charity’, I think that sounds good! I wanted to do something big that would have an impact.”

To support branch manager Carlie with her skydive, visit: www.everyclick.com/raisingforraife/info

Staff at the Melksham branch of Nationwide are also selling raffle tickets for a prize draw to be made in August, visit the branch for more information.