Fundraiser sets a new challenge as he braves the shave 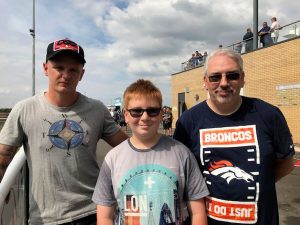 YOUNG fundraiser, Ciaran Hanks, is taking a break from the pool and taking on a new fundraising challenge – having his head shaved for the Teenage Cancer Trust. For this challenge, he will also be joined by his father, Jason Hanks, if he raises over £500.

Ciaran altogether has raised over £1,000 for charity since he began his swimming journey in 2016, never having swam a length before. He swam the equivalent length of Loch Ness, 1,454 lengths of a 25m pool. He then went on to swim the equivalent length of the River Thames. He was joined in his fundraising by British Paralympian swimmer, Stephanie Millward, and by members of Melksham Town FC.

Ciaran’a latest headshaving challenge will take place on Saturday 11th August at Oakfields stadium, with the support of Melksham Town Football Club. Ciaran’s headshave (and Jason’s too, if over £500 can be raised) will take place at 5.30pm, following  Melksham Town’s preliminary round match of the FA Cup vs Badshot Lea, which kicks off at 3.00pm. As Ciaran is an avid Town fan, he has asked ‘right back’ defender, Mark Cooper, who is a barber, to do the shave for him.

Ciaran said, “I haven’t swam for a while due to schoolwork and just generally needing a break. I fancied doing something different. My parents have friends that have had cancer, some have been extremely lucky and made good recoveries, others unfortunately not so. I know cancer has no age limit and wanted to make a difference to poorly kids about my age, so I chose the Teenage Cancer Trust.

“Melksham Town FC were very supportive last year, supporting me in the final lengths of my Loch Ness swimming challenge and I wanted to keep the head shave nice and local in the community. When my dad mentioned that Mark Cooper is a barber, I asked Mark if he would do my shave for me and he has very kindly agreed. I really hope I get to £500 of donations because then my dad will shave his head too.”

His father, Jason said, “Ciaran has done a phenomenal job over the last couple of years, raising over £1,200 for two charities by completing swimming challenges, but as I can’t swim, the only support I could offer was sitting on the side.

“As he’s chosen something different this year, I’d like to offer my support by agreeing to have my head shaved if he reaches £500, in order to help him raise more. I’ve already got one client that has promised £100 if I have the head shave and one eyebrow shaved, so we’ll see where this takes us!”

To donate towards Ciaran’s fundraising total, visit his JustGiving link at https://www.justgiving.com/fundraising/CiaransHeadShave