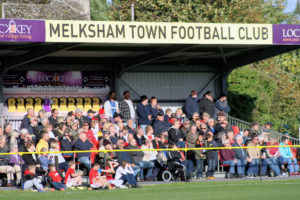 IT was the end of an era last month for the former home of Melksham Town Football Club, as demolition work began on the Conigre – but for the club, the memories of the iconic football ground will always live on.

Home to the football  club for 96 years, Town left the Conigre on the Melksham House site in 2016, moving to their new home at Oakfield Stadium in January 2017.

Until last month, the Conigre lay empty, but now work has begun to clear the site in preparation for the construction of Wiltshire Council’s proposed Melksham Campus – home to the town’s new leisure facilities.

As the bulldozers moved in to pull down the stands and shelters around the former pitch, the club’s chairman and one of the club’s presidents have paid tribute to the times gone by at the Conigre.

Chairman Darren Perrin told Melksham News, “Speaking on behalf of the older generation of Melksham, it is a very sad day – there have been some unbelievable magic moments and memories at the Conigre. It is a place that myself and my family will never forget,  and a place that anyone associated with the football club will never forget.

“There are so many memories! One would be going back to the Conigre at the end of the season in 2015 to meet the reserve team and the A team and the hundreds of supporters in our small little club after winning the Western League Premier Division. Also, being able to attract thousands to close down the ground in 2016, with the Manchester United Legends.

“One of the other great memories was when Southampton brought their full first team squad in November 1986, including Matthew Le Tissier and Joe Jordan, to switch on the floodlights for the very first time at the Conigre.”

“The ground has been a huge part of the club’s history, and it has seen some fantastic characters over the years. The Conigre was an iconic non-league football ground.”

Sharing his memories with Melksham News of the club’s ups and downs at the Conigre, joint club president Dave Phillips said, “I watched my first Melksham Town game in 1954 as a young lad at the Conigre when I was taken by my father. It was a much different ground to the one we left last year. In the 50s there was a stand and on the far side there was no fence and it opened up into the surrounding fields.

“I joined the committee in 1976 and one highlight during my time was beating Wellington 2-0 at the Conigre, winning the Western League Division One title – that was a great moment for me.

“One memory I have is from October 1957, Town played Trowbridge Town to a record attendance of 2,821 – which was still the record when we left. Trowbridge were a strong side in the Western League and we were the underdogs. We lost goalkeeper Mike Beavan after 20 minutes because of a finger injury and had no substitute, so a player had to go in goal. We ended up losing 6-0.

“I also remember Melksham playing in the first round proper of the old FA Amateur Cup in 1968 against Harwich & Parkeston, unfortunately losing 3-1.

“I will remember the Conigre as a small ground with a tremendous atmosphere. Having the stands so close to the pitch helped to create that atmosphere. It is a ground that will hold memories for me for the rest of my life and will always have a special place in my heart.”