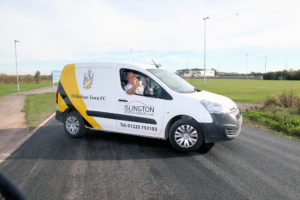 THE access road to Oakfield Stadium which was deemed ‘not fit for purpose’ has finally been given a more permanent surface by Wiltshire Council after months of campaigning by Melksham Town Football Club.

Since the club moved into the grounds in January 2017, the temporary access road has been a source of contention, with visitors complaining about the uneven surface, numerous potholes and loose stones and gravel.

Wiltshire Council had temporarily resurfaced the road a number of times filling in the potholes, opting to not resurface the road as it would ‘require significant investment’ as the road is due to be replaced  by the developers of the housing estate planned for adjacent to the Oakfield site.

However, after a long fought ‘battle’ by the club’s committee, Wiltshire Council resurfaced the access road at the end of last month.

Melksham Town FC’s chairman, Darren Perrin said, “I want to praise the committee for this result as they battled long and hard to get this done. I also believe Wiltshire Council deserve huge credit for finally sorting this out.

“It was becoming a real issue, there have been numerous complaints about the road, and rightly so. Complaints have ranged from broken suspensions, flat tyres, and taxi drivers refusing to pick people up. Functions have been cancelled, impacting on us financially.

“And to cap it off, in the last six weeks one ambulance driver said he would refuse to use the road if treating spinal injuries or broken bones.

“If Wiltshire Council had done this in the first place, it would have solved a lot of heartache and pain. The road was dangerous, a real health & safety issue – so huge thanks to the committee for solving this problem.

Wiltshire Council was approached for comment as to why the road was not resurfaced when the complaints began. Melksham News also asked how much the temporary repairs had cost the council, but no response had been received before going to press.