Save the lunch club! Local woman leads campaign to save much-loved service 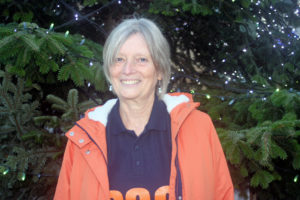 LOCAL woman, Sue Mortimer, has launched a campaign to save the Melksham Lunch Club at the Assembly Hall from closure.

The long-standing service is to close next week in a story exclusively revealed in Melksham News last week. According to Wiltshire Council, the service is not financially viable and is running at a loss of £82,000 a year.

However, Sue Mortimer, pictured, has plans to keep the much-loved service running, with the help of existing staff and a band of volunteers.

Speaking to Melksham News, Sue said, “I just can’t bear to see it go! It’s the whole social side of the service that is important. These people have been meeting for 20 to 30 years, they don’t want ‘meals on wheels’, they want to be able to get out and meet some people. It’s something that we have to keep in Melksham for them.

“It’s early stages yet, but I am going to speak to the staff at the lunch club to see how they can be involved. I’ll also have to set up a charity to run the service and the waitering will be done by volunteers. We’ll probably run the club initially on Wednesdays, Fridays and Sundays – as these days are already quite popular.

“There’s quite a lot of interest in the town already, I’ve spoken to a number of people who are willing to give their time as volunteers.”

The lunch club was first based at Melksham House for many years before moving to the Assembly Hall nearly five years ago. Many local people visit the club regularly for hot meals and a chance to meet up with others in the community.

“We nearly lost the service five years ago when they closed Melksham House,” continued Sue. “I was so pleased that Wiltshire Council took it onboard and the feedback then was that it is a good service and an important social service for the town. However, I suppose now they have difficult decisions to make with all the cutbacks going on.

“The timing is good for me too, as I retired at the end of November, so I have the time to try and get it up and running. I’ve spoken to Rhys Schell, Melksham’s community engagement manager at Wiltshire Council, and he’s given me some ideas about applying for grants and people who can help me. He was quite excited by the idea.

“It’s early days, but what we need is a bank of volunteers – ideally around 30 volunteers. I’m sure that the people of Melksham will rally round so that we can keep this going.”

To register your interest in volunteering for the club or for more information, contact Sue on 07719 935883.