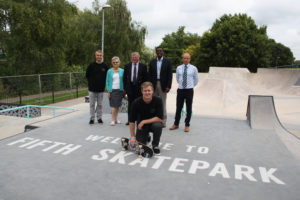 MELKSHAM’S professional skateboarder, James Threlfall, has been awarded an MBE in the New Year’s honours list for his services to young people in Wiltshire.

James, who grew up in Melksham and learned to skateboard in the town, has been recognised for his work developing and organising the Wiltshire Skate Series – the annual programme of youth-led competitive skate events that take place across the county, that first started in 2010.

Speaking to Melksham News, James said, “I really never expected an award like this! It’s great to receive recognition like this. I never started this project thinking, ‘I should do this to get an MBE,’ so I’m really pleased. My family are buzzing, my parents are over the moon!

“I’m lucky to have been in a position to have done these things. It’s work that I am very passionate about – it never crossed my mind to not do this work, and I will continue working on the project.

“Receiving this award  gives me time to reflect on all the work that I have done, which is really cool.”

James developed his idea for the Wiltshire Skate Series with the support of Wiltshire Council. He set up a social media account to advertise the events, coordinating the dates for each competition with the council, and running the competitions at each event. He also organised significant commercial sponsorship in the form of substantial prizes from prestigious skateboarding companies.

James said, “Thanks to cllr Jonathon Seed and Wiltshire Council for all of their support with the Wiltshire Skate Series and for their support of the local sports community – it’s a unique set-up, having them fund the skate series. Hopefully this MBE will be seen as a win for the team as a whole.”

Outside of his work for the Wiltshire Skate Series, James is the ambassador for the mental health charity, CALM and works for Inner Flame, which delivers Prince’s Trust courses for disadvantaged young people. He has also taken the position of coaching primary school children.