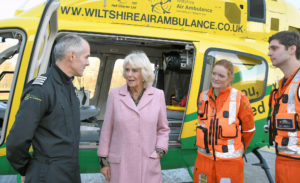 The official opening comes seven months after Wiltshire Air Ambulance moved to the purpose-built airbase in May 2018. This significant milestone brought together the helicopter, operational, fundraising and administrative teams on to one site and on land the charity owns for the first time, securing its future.

The Duchess, who is patron of Wiltshire Air Ambulance, was welcomed by the Lord-Lieutenant of Wiltshire, Sarah Rose Troughton, and presented with a posy of flowers by four-year-old Mia Burry.

Mia, who lives in Semington, was treated by Wiltshire Air Ambulance’s paramedics when she was four weeks old and struggling to breathe. She made a full recovery after being treated in hospital for pneumonia and sepsis.

In the charity office the Duchess, on behalf of Wiltshire Air Ambulance, presented a trophy to long-standing volunteer Colin Smith. Colin, of Chippenham, has volunteered with the charity for 19 years, co-ordinating the distribution and collection of tins all over the county without claiming a penny in mileage expenses.

The Duchess was also given a demonstration of the state-of-the-art immersive simulation suite, with a scenario including a parachutist injured on the ground by the Westbury White Horse. The charity’s highly-trained paramedics use the room to develop their critical care skills.

Before being shown the charity’s Bell 429 helicopter, the Duchess unveiled a commemorative plaque in the hangar to mark the official opening of the airbase, in front of 150 guests.

She told the guests,“I would like to say a huge thank you to everybody who has been involved in this wonderful project. I know the fantastic work the air ambulance does. I have known friends that have literally been saved by it.

“I feel very happy when I see them buzzing over the top of my house, which I think is their route, and I give it a cheery wave every time I see it. I think Wiltshire is particularly lucky to have a very, very special air ambulance.”

The Duchess was also introduced to The High Sheriff of Wiltshire, Nicky Alberry; the chairman of Wiltshire Council, Mrs Alison Bucknell; the leader of Wiltshire Council, Baroness Jane Scott of Bybrook OBE; the mayor of Melksham, cllr Adrienne Westbrook; the MP for Chippenham, Michelle Donelan; Wiltshire’s Police and Crime Commissioner Angus Macpherson; the Chief Constable of Wiltshire, Kier Pritchard and the chairman of Melksham Without Parish Council, cllr Richard Wood, followed by Barbara Gray, the director of income generation and communications at Wiltshire Air Ambulance, and the charity’s chief executive David Philpott.

David Philpott, chief executive of Wiltshire Air Ambulance said, “It was an honour to welcome The Duchess of Cornwall to our new airbase. Her Royal Highness has always taken a keen interest in our charity and we were delighted that she was able to visit and meet the staff, crew and trustees, as well as people whose lives we saved and supporters.”